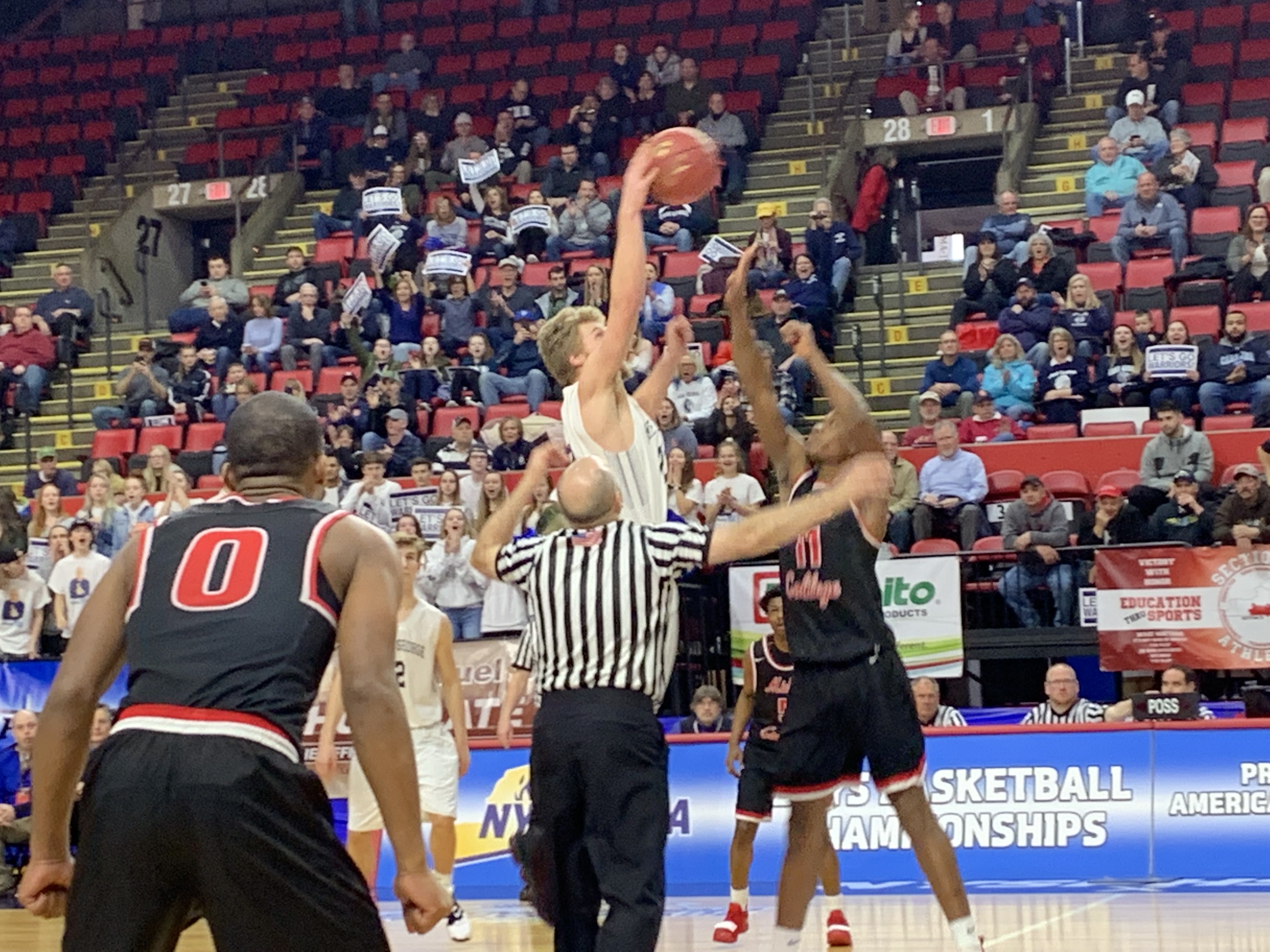 BINGHAMTON, NY — A year removed from their last championship run Lake George returned to Binghamton to play the Middle Early College Kats. They ran out of steam in the fourth quarter, ultimately losing 80-63.

“I thought we were playing pretty good D but they got the ball to the open guy and they were shooting lights out,” said Coach Blake White.

Lake George started out very slow as they struggled with the intense man to man defense they were up against. Their star forward Mason Flatley was face guarded by Keyunte Jones the whole game and was effectively shut down. But down only five the Warriors turned to Chris Becker, their much improved center for offense. Becker scored eight points as Lake George rallied to lead 19-16 at the end of the first quarter.

Lake George’s passing was sloppy at best throughout the entire game. Nearly every pass resulted in the receiver having to jump to get the ball. They also attempted more than their share of cross court passes and high arcing low post entries that the athletic Kats could feast on, giving Middle Early College plenty of transition buckets. Mason Flatley was held to six points and Chris Becker led the Warriors in scoring with 12 points but Lake George found themselves trailing 33-32. Devonte Prince led the Kats with 11 points.

Lake George came out of the half finally under control on the offensive end. Alex Leonelli ran the show and added six points for the Warriors. Trouble came with their inability to close out on the shooters. Middle Early College hit four triples, two by Flatley’s defender Keyunte Jones and held onto their lead 51-50 going into the fourth quarter.

The pressure of the final quarter and additional defensive pressure by the Kats didn’t mix well for Lake George. The ball movement and control reverted back to how it was in the first half and after a couple minutes it was clear that the Warriors just didn’t have anything left in the tank. Middle Early College went on a 23-6 run in the last four minutes to close out the win. Junior Jamond Jones led the Kats in scoring with 23 points, 11 of them were in the fourth quarter. Chris Becker led Lake George with a 18 point 10 rebound double double. Mason Flatley also added 13 for Lake George with five in the final quarter.

Coach White said, “I thought we could have had it if we could handle those turnovers. But they turned up the defensive pressure in that fourth quarter and it threw us off.”

“This program has been on such a high since 2013 and these seniors have been a big part of that. We’re going to miss them but we wanted to make sure that they left with their heads held high because this is an amazing feat,” said Coach White.