Siena squeaks by Manhattan, looks towards showdown with Rider

The Saints won six of seven, swept Manhattan and in a three-way tie for second place in the MAAC. 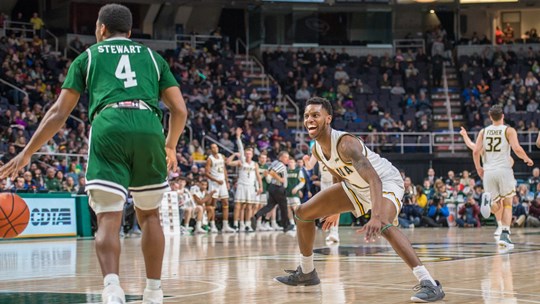 RIVERDALE, NY — Before Siena’s Sunday Metro Atlantic Athletic Conference showdown against the Rider Broncs in Lawrenceville, N.J., first things first: they were playing to get back to .500 on Friday night.

The Saints accomplished it with a 51-49 victory over the Manhattan Jaspers (7-17, 5-7) at Draddy Gymnasium, which was their second win over there in nine years. They are now 12-12 overall for the season, and  7-4 in MAAC play. They have won six of seven while snapping the Jaspers’ three-game winning streak.

“I did not know about our record until Mark [Singelais of Albany Times Union] told me the other day,” said Siena coach Jamion Christian after his team swept the  Jaspers this season. “I worry about the record at the end of the season. At the end of the season, there’s one team standing as MAAC champion, and this is where we want to be. It’s about learning and growing, and being our best. We need to prepare at our best.”

The Saints had to earn the win in the final minute. As they were leading 48-41 with 1:33 to go, the Jaspers made it a three-point game at 48-45 when Warren Williams made one of two free throws with 1:14 to go and Tyler Reynolds (18 points) hit a 3-pointer with 38 seconds to go in regulation.

Samir Stewart missed a 3-pointer, but Ebube Ebube grabbed the rebound and hit the layup to cut Siena’s lead to 49-47 with 12 seconds to go in the game.

Pickett missed a free throw to give Manhattan the last shot to win it or tie it. Instead, Mack missed a desperation shot from beyond halfcourt at the buzzer.

Siena’s defense disrupted the flow of Manhattan’s offense in that stretch, and it was why Siena hung around at 17-16 at halftime despite shooting 25 percent and not made a three-pointer.

“We have become one of the worst MAAC defensive teams to one of the best,” Christian said of his team’s defensive development this season. “Coach Carmen [Maciariello] has done a great job of getting these guys to play defense. We simplified it, and they have brought into what we were teaching them. It has become a thing to play defense. They have the desire to be great.”

The Saints took change in the second half by scoring the first seven points of that half on Sloan Seymour’s 3-pointer, Evan Fisher’s jumper and Kevin Degnan’s layup.

The Saints answered again after Ebube’s layup made it a 23-20 game. They had two free throws by Kadeem Smithen, a 3-pointer by Seymour and a jumper by Fisher.

Fisher scored eight points in a span of three minutes to give the Saints their biggest lead at 43-39 with 6:59 to go.

“Evan’s been amazing,” Christian said of his senior scoring 18 points in this contest. “It’s my dream to coach him. I am going to miss him. He fits what we want to do be by shooting and playing defense. He has this greatness about him. He makes everyone better.”

Smithen did well in his own right. He has been getting more minutes lately, and his nine points and nine rebounds validates Jamison’s reasoning to play him.

“He has been ready to go,” said the Siena head coach. “We built trust this season. He brought in what we wanted from him at the start of the season. He’s a team-first guy.”

Smithen has made the most of his opportunity that his coach gave him by grabbing rebounds and setting up picks to his teammates, and he is appreciative of being put in a position to succeed.

“Honestly, I wouldn’t be staying at Siena if I didn’t trust him,” the  senior guard said.

Fisher enjoyed his final game ever at Draddy Gym.

“It’s always great to play at Manhattan,” he said. “I am going to miss playing in front of these fans.”

From one challenge to another on Sunday afternoon when the Saints are playing preseason MAAC favorite Rider, who lost 81-80 to Canisius at their home court and first place in the MAAC on Friday night that have them tied with the Saints and Quinnipiac in a three-way-tie for second place

“Rider’s a fun team to play against,” Fisher said. “It will be fun. They are a good, physical team.”