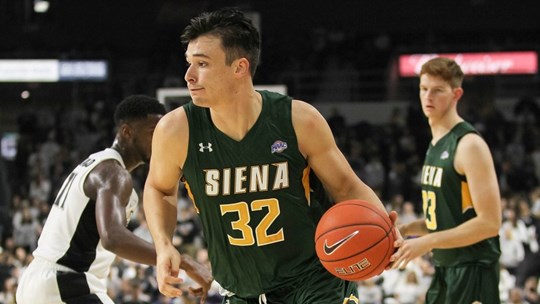 First-year Siena basketball coach Jamion Christian was 0-for-1 at his first crack of ending Siena’s losing streak at St. Peter’s court. The Saints took a 65-60 loss to St. Peter’s Peacocks (4-9, 1-0) on Thursday night in both team’s first MAAC game of the season.

“You know everyone in the MAAC is good,” Christian said after the Saints’ first loss in conference play. “We were going to get St. Peter’s best shot. We will rebound against Canisius (Siena’s next opponent Saturday night at Times Union Center).”

“That’s what good players do,” Christian said of Turner’s performance.

It was Turner’s fourth 20 or more points performance of the season.

As much as Christian lauded Turner’s performance, he offered a different take to why Siena lost.

“I would say we expanded too much energy in the second half to comeback,” he said. “We have been a good 2nd half team, but we can’t rely on being a 2nd half team to win games.”

“Our inexperience showed in our defensive footing,” Christian said.

To Siena’s credit, they figured it out in the second half. Sloan Seymour (12 points) slowed down Idowu and Taylor.

“We believe in Sloan’s ability,” Christian said of his freshman. “He did a fine job of defending 23 (Idowu) and 24 (Taylor).

Seymour was thankful to be entrusted with the task despite his struggles in the first half.

“We made adjustments in the second half,” he said. “We were able to take away St. Peter’s strength by wearing them down and bruising them.”

It did not go unnoticed by the Siena head coach.

“Our coaching staff has done a great job making adjustments as the game goes on this season,” Christian said.

In the end, Turner became the beneficiary of Idowu and Taylor being defended well in the second half.

“Jalen is one of the best shooters in the MAAC”, Christian said. “He made some tough shots, and he is going to get better.”

Despite this loss, it was not viewed as a setback.

“We have to keep learning and getting better,” Christian said.