No questioning Siena’s mettle in comeback win over Marist 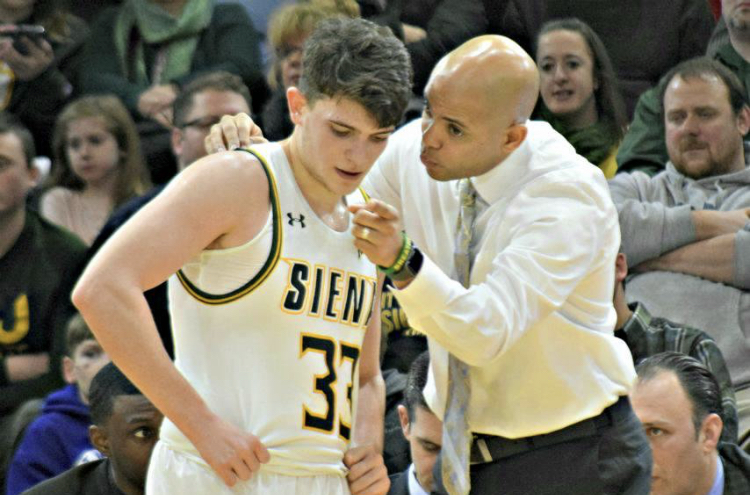 POUGHKEEPSIE, NY — From Jamion Christian’s perspective, Friday night could be the game that his players grew up. It could also be the turning point of their season where there have been highs and lows for a Siena program trying to make its mark under their first-year basketball head coach.

The Siena Saints earned a 71-66 victory over the Marist Red Foxes at McCann Arena after responding from a 51-44 deficit with 8:08 remaining in the game. This accomplishment helped them earn many firsts. It was their first road Metro Atlantic Athletic Conference victory after snapping their 11-game MAAC road losing streak. It was also their first conference win of the season and Christian’s first ever MAAC victory.

“It was a great road win for us,” Christian said of his 6-10, 1-2 team. “Our guys played outstanding down the stretch. We had fresh legs in the end. Denzel (Tchougang) and Kadeem (Smithen) made plays (on defense). We had tremendous composure. I am excited for our team.”

With four minutes to go in a 55-55 game, the Saints went on a 11-4 run to take a 66-59 lead over the Red Foxes. Jalen Pickett (nine points) broke the tie with a jump shot, Manny Camper (nine points) made a three-point play and Evan Fisher (game-high 23 points) and Sloan Seymour (12 points) hit couple of 3-pointers.

Saints fans in attendance sensed a victory was in the making for their team, so they made their presence felt by cheering their team on in an attempt to give them a lift.

Isaiah Lamb (13 points) executed a couple of layups to keep Marist within striking distance at 68-64 and 69-66, but in the end, Siena hit three of four free throws (Pickett hit one of his two free throws to extend Siena’s lead at 69-64 and Georges Darwiche hit two free throws in Siena’s last possession of the game) to sealed the victory.

“We showed emotional toughness,” Christian said. “These guys were in the right frame of mind. We were in a good place. Our emotional intelligence and toughness helped us get through it.”

Not only Siena showed its mettle in the last four minutes of the game, but their 11-2 run after Marist took a 51-44 lead that helped set the stage for Siena to lead the game 55-53.

Camper returned on the court after missing the past four games with a stress reaction in his foot. It took him time to acclimate himself on the court, but in the end, his legs picked up, and he was able to get rebounds to help Siena down the stretch. It was fitting in that sense that he helped won the game by hitting a three-point play to give the Saints a 55-53 lead with 4:46 to go in the game, and getting the defensive rebound to end the game after David Knudsen missed the three-point attempt.

“He looked good,” Christian said about Camper’s first game back. “I expect him to be good based on how he worked in practice this week. He wanted to play last week, but I wanted him at 100 percent so he can the game he is capable of playing.”

This plan worked out well.

“He is growing on the defensive end, and offensively, he is our best finisher,” Christian said of his sophomore guard/forward.

Camper did not feel any rust from his first game back.

“I was comfortable from the start,” he said of his slow start. “I was focusing on my matchup with Bryan Parker, and I was able to expound my energy by defending him.”

Pickett played the role of a facilitator in this contest, and it showed with his eight assists by setting up Fisher, Camper, Seymour and Darwiche.

Still, he made shots down the stretch, and he put himself in a position to make his free throws in the end to help Siena preserve the win.

“He did a great job of distributing the ball with guys matching him up well,” Christian said of his freshmen star playing through a finger injury.” “Jalen’s a great player. When you are a great player, the game can come to you in a lot of different ways whether it’s playing defense of distributing the ball. We were able to feed of his confidence.”

“Jalen Pickett is so good,” he said. “You have to pick your position with him. He can play the ball well and get to the paint. He can shoot 3s, but he won’t settle for 3s. He will find the open guys.”

Siena is back at it on Monday night when they are home to play the Monmouth Hawks at Times Union Center.