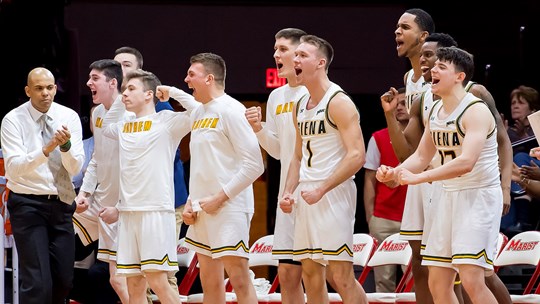 NEW ROCHELLE, NY — Siena freshman phenom point guard Jalen Pickett had a rough go of it for most of the game against the three-time defending Metro Atlantic Athletic Conference champion Iona Gaels on Saturday afternoon.

However, something clicked for him in the second half like it has for him all season. The five-time defending MAAC Rookie of the Week spearheaded the Saints’ 15-0 run by scoring the first 10 points of that run to give the Saints a 56-54 victory over the Gaels (7-14, 5-5) at Hynes Center. Overall, he finished the game with 17 points after being held scoreless in the first half.

“He has the ability to reset quickly,” Siena head coach Jamion Christian said of his start’s ability to shine in big moments. “He remains confident in situations that he did not shoot well. He uses his possession as his next opportunity rather than look back. It’s why he is the best guard in the MAAC and in the country.”

Pickett hit a couple of layups, and he followed it up by hitting couple of 3-pointers. His first 3-pointer tied the game at 46, and his second 3-pointer gave the Saints a 49-46 lead.

“My team just has confidence in me,” Pickett said of recovering from a rough start. “I am always driven. (Kevin) Degnan set up for screens for me to score. We were talking about taking shots and finishing”.

All Iona coach Tim Cluess could do is lit his eyes when asked about Pickett being hot.

“He plays like an adult in an adult league,” he said. “He has physical advantage. He uses his body to defend and go around the rim. He used pick-and-roll better. He makes others better. We did a good job on him in the first half, but he made plays in the 2nd half. He has this composure. It’s something special.”

Iona made it interesting when E.J. Crawford (game-high 19 points) hit a layup to cut their deficit to 54-48, and he hit four free throws when Siena fouled him twice to make it a 54-52 game.

When Iona fouled Pickett to put him on the free throw line, Iona fans did all they could to distract him by screaming and heckling him. He disappointed them by hitting two free throws to maintain Siena’s lead 56-52.

“The last sequence was crazy,” Degan said after grabbing eight rebounds and scoring seven points. “I’m glad we pulled it off.”

Siena has continued to find ways to win and handle crisis in the games during MAAC play, which has been the reason for the team’s growth this season.

“We have a learning and observing environment,” Christian said of his team’s growth this season. “It’s an opportunity to learn. We caught up with wins and losses, but it’s about learning and how good you can be.”

Christian noted what this win meant for a Siena program he is trying to establish in his first season as Siena head coach.

“Huge win for our program,” he said. “I have big shoes to fill with linear of great coaches over the years at Siena. Winning at Iona and Marist builds character. Winning on the road against a MAAC team is tough.”

Siena’s defense was able to hang around in the first half and why they stayed within striking distance in the second half. Siena had 34 rebounds as a team.

“Our defense made plays,” Christian said.

Siena will be home to play Fairfield on Monday at Times Union Center.